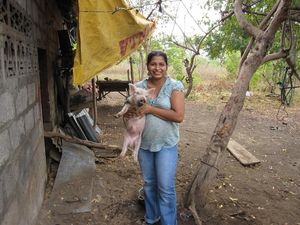 Elba -- Vice Coordinator of the Pastoral Committee and JustHope's Director of Women's Projects -- has been struggling with a heart problem that has been aggravated by the extreme heat and the long walk from her home to the Comite office, and visiting women in the micro-credit project. After several days in the hospital in April, she is on medication and seeing the doctor twice a week.  Her energy and capacity for physical exertion is limited.  The hope is that the medications will stabilize her, but the doctors expect it to be a situation she will need to manage carefully for the rest of her life.  Even so, Elba continues to lead the Comite in Juan Enrique's absense (see below) and manage the micro-credit projects in Chacraseca and in Santa Emilia (a five hour bus ride away), and co-manage the new and very busy Ferreteria (hardware store) project that a group of women in Chacraseca have opened.

Juan Pablo (Van driver for JustHope and many other groups) 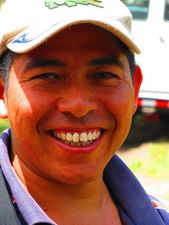 After surgery in January to remove a kidney stone the size of a golf ball... AND a second surgery in May to remove a stint that was inserted during the first surgery, Juan Pablo is healing well. The much needed surgery (he's been fighting the stones for 2 long years) was finally made possible when a neighbor He is driving again, but it will be severeal weeks before he can lift luggage or do physical labor.  His sons are helping out... the worst part for Juan Pablo is having to watch instead of help as the groups he is with build houses of work on other projects.  He and his family are deeply grateful for the assistance and the prayers they received from their network of friends across the US.

Juan Enrique left in mid April for an extended stay in the US.  He is living with 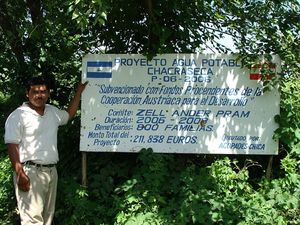 an aunt in Houston, and expects to be there until October.   True to form, Juan Enrique is sharing Chacraseca's story with anyone who will listen, and talking with everyone he meets about supporting projects.  While Juan Enrique is in the States, Elba is filling his shoes as Coordinator of the Comite.