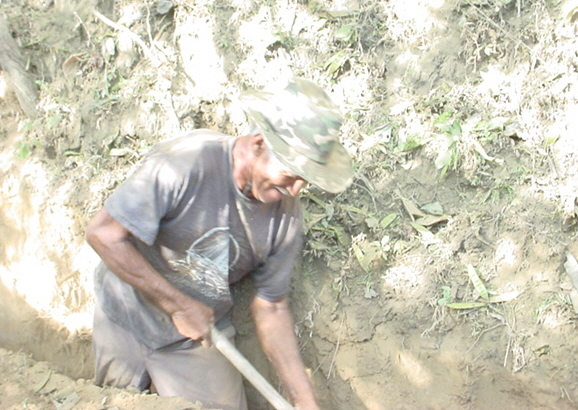 JustHope's first project in 2007 was to partner with community leaders in the town of Chacraseca to complete a potable water project for its 8,000 residents.

In 2000, the poor community of Chacraseca, Nicaragua had a dream — clean drinking water for all of its 1,250 families. They worked with the University of León to design a project costing $760,000. After seeking grants for two years, the government of Austria offered €250,000. So, they scaled the project back significantly, and the entire community — men, women, and children — began working to make their dream a reality. The community dug all the pipeline ditches and built the water storage tanks themselves. They made the grant stretch further than anyone believed possible, and by December of 2008 all but 200 families had clean, fresh water.

Due to soaring costs, the 200 families who live at the furthest edges of the 49- square-mile community could not be included in the final phase of the project. Everyone was deeply disappointed at this realization. “We are a whole community,” one leader said reflectively, “todos, no algunos [all, not some]". So, even though they were weary after eight long years, Chacraseca’s leaders and JustHope made a commitment to try and extend the project to the outlying families.

To do so, they needed $52,000 for water-line pipe to reach the 200 homes, and $25,000 to finish the third well. JustHope Partners and two other solidarity groups from the U.S. joined them in their dream and worked for three years to raise the $77,000 needed!

In 2016, the Chacraseca Potable Water project became fully sustainable. Project lead Juan Enrique reported, "This year we paid all our bills for the project and have no debt! We also replaced a burned-out pump without having to ask any North American groups for help." The community of Chacraseca now manages this project independently with JustHope only contributing funds to the community for maintenance of the pumps.